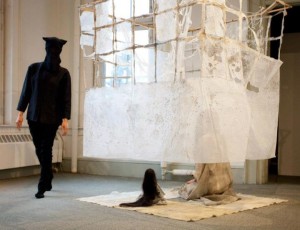 During the graduation show at Vermont College of Fine Arts on August 1st, 2012, 10 min performance was held in a hanging object which is based on an image of Fukushima Daiichi Nuclear Plant after the blast, that brings fear of the man-made disasters into our visual psyche. The performance dealt with artist’s desperation about the urgency of expressing collective fears about the devastation of the bodies. The historical conjuncture, with the Tohoku earthquake and tsunami in Japan and the legacy of the nuclear era, opened up a space for the performativity of one’s questioning of history, memory, witnessing, and disaster in the present moment.