“My work is a direct response to the tragedy of the past,

but the past I depict wants to remember the present.

it is not meant to deliver certainties.

It asks us to remain in the present,

so that we can develop a new relationship

of mind and body,

from our own extinction.” 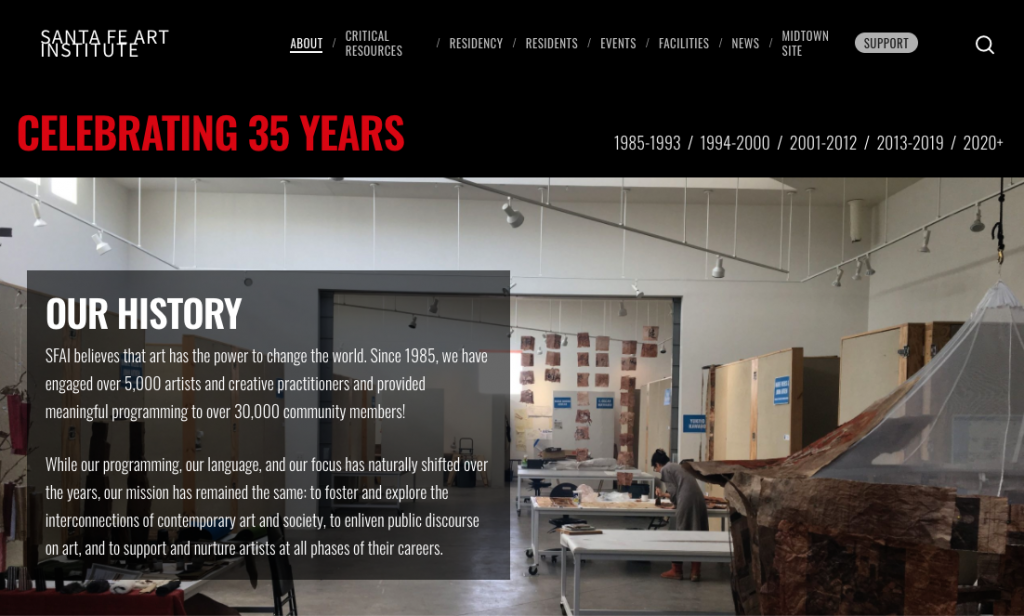 To celebrate the anniversary, SFAI have launched a new website that shows SFAI studio and my latest piece (Fat Man (1945 Oregonian) 2019) in making. 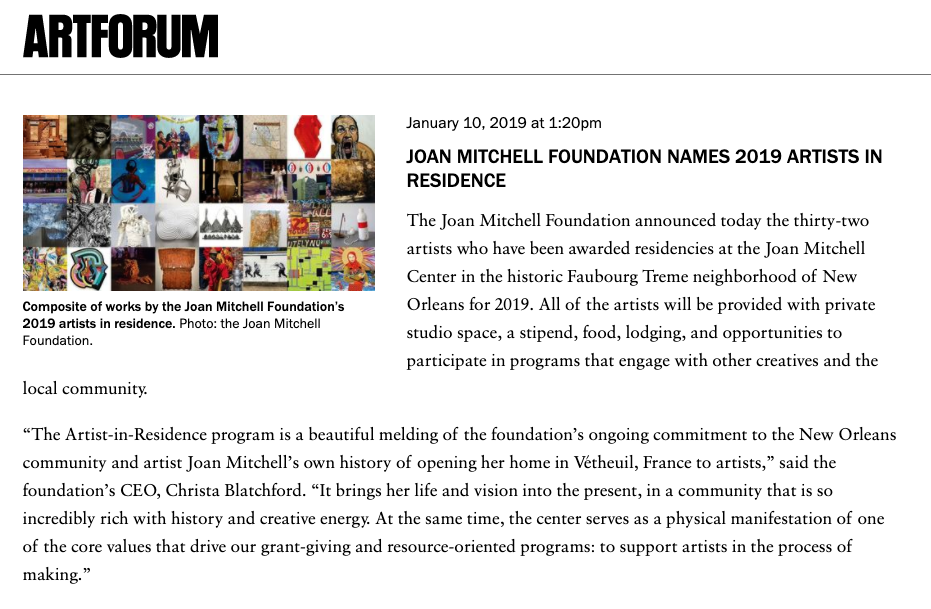 https://joanmitchellfoundation.org/blog/announcing-2019-awardees-for-artist-in-residence-program?fbclid=IwAR20OZk30cshpv7lEP69rLBTj8obrP4e1suV-_Ud_lhRjV5HwoH51bkeobU
January 10, 2019
The Joan Mitchell Foundation is pleased to announce the 32 artists who have been awarded residencies at the Joan Mitchell Center in New Orleans for the coming year. All of the artists will be provided with private studio space at the Center, which sits on a two-acre campus in the historic Faubourg Treme neighborhood, along with a stipend, communal dinners, and opportunities to participate in programs that actively engage both the professional arts community and the public. Additionally, those artists traveling to the Center from outside New Orleans are provided with on-site lodging and financial support to transport necessary materials and works. The Artist-in-Residence program was developed as an extension of the Foundation’s support of the local arts community in New Orleans following the devastation of Hurricane Katrina, and has become a vital realization of artist Joan Mitchell’s vision to provide artists with the necessities of time and space to create their work.
The 2019 Artists-in-Residence include:
John Barnes, New Orleans, LA
Gus Bennett, New Orleans, LA
Melissa Brown, Brooklyn, NY
Ruth Leonela Buentello, San Antonio, TX
Sean Gerard Clark, New Orleans, LA
Veronique d’Entremont, Los Angeles, CA
Marianne Desmarais, New Orleans, LA
Michael Dixon, Albion, MI
Ana Fernandez, San Antonio, TX
John Yoyogi Fortes, Sacramento, CA
Jacqueline Gopie, Miami, FL
Shana Kaplow, St. Paul, MN
Yukiyo Kawano, Portland, OR
Jamil Khoury, Chicago, IL
Laura Kina, Chicago, IL
Athena LaTocha, New York, NY / Peekskill, NY
Beili Liu, Austin, TX
Michael Meads, Abiquiu, NM
Kristin Meyers, New Orleans, LA
Stephanie Patton, Lafayette, LA
Shani Peters, New York, NY
Lucy Puls, Berkeley, CA
Devin Reynolds, New Orleans, LA
Christopher Saucedo, New Orleans, LA / Rockaway, NY
Amy Schissel, Morgantown, WV
Joey Slaughter, Ruston, LA
Jared Theis, San Antonio, TX / Berlin, Germany
Carlie Trosclair, St. Louis, MO
Eric Waters, New Orleans, LA
Antoine Williams, Greensboro, NC
Sherri Lynn Wood, Cincinnati, OH
Jave Yoshimoto, Omaha, NE
The Foundation first began hosting artists in temporary residency spaces in New Orleans in 2013, and then opened the Joan Mitchell Center in 2015. Over these five years, it has hosted nearly 200 artists. Establishing opportunities for local artists in New Orleans remains a critical aspect of the Foundation’s work at the Center, and every Artist-in-Residence cycle includes a selection of artists from the city. The residency program is complemented by a roster of events, including open studios, artist talks, and networking events, which foster creative exchange and encourage relationship-building among artists and other members of the New Orleans community. Artists also have access to professional training and advisement, including studio visits with curators, and consultations and workshops with arts, business, and legal professionals.
“The Artist-in-Residence program is a beautiful melding of the Foundation’s ongoing commitment to the New Orleans community and artist Joan Mitchell’s own history of opening her home in Vétheuil, France to artists. It brings her life and vision into the present, in a community that is so incredibly rich with history and creative energy. At the same time, the Center serves as a physical manifestation of one of the core values that drive our grant-giving and resource-oriented programs: to support artists in the process of making,” said Christa Blatchford, Chief Executive Officer of the Joan Mitchell Foundation. “We look forward to engaging with our artists-in-residence and seeing the exciting and unexpected ways space and time can impact their work.”
There are three selection tracks for residencies at the Joan Mitchell Center. Each spring, artists based in New Orleans are invited to apply for five-month residencies through an open call. Applications are reviewed by an anonymous independent panel comprised of artists, curators, art historians, and leaders from a variety of arts organizations.
On the national level, previous recipients of Joan Mitchell Foundation grants, which include the Painters & Sculptors Grants, Emerging Artist Grants, MFA Grants, and Emergency Grants, are invited to apply for one- to three-month residencies. Individuals who have served as Artist-Teachers for the Foundation are also able to apply. Applications are likewise reviewed by an anonymous independent jury, which makes final selections.
As part of the Foundation’s efforts to reach and support a wide spectrum of artists, additional residency spots are held for partnerships and organizational initiatives. For the 2019 awards cycle, the Foundation collaborated for the second year with the Alliance of Artist Communities and the nonprofit 3Arts to award two Chicago-based artists with residencies.
“My residency at the Joan Mitchell Center was an experience that exceeded my expectations on many levels,” stated Louise Mouton Johnson, a New Orleans native visual artist and retired arts instructor who was in residence from February to July 2018. “The connections and reconnections that I formed during my residency were numerous. My time there overlapped with the residency of one of my former art students—an inspiration in itself. Other former students who had previously been residents came to visit during many of the social activities coordinated by the Center. These same events attracted other community and cultural leaders with whom I exchanged contact information and have been in touch with since, even leading to my involvement in a major event this year.” 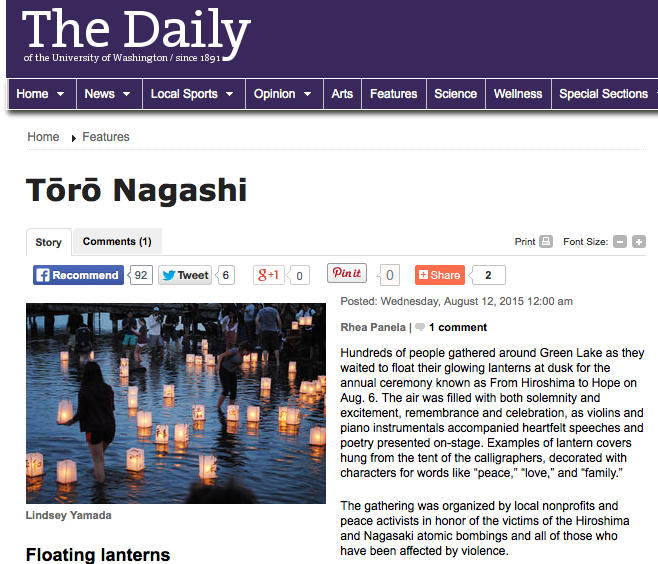 Large black-and-white photos of the horrors of the Hiroshima and Nagasaki bombings were displayed along the walkway around the lake. A replica of “Little Boy,” the bomb dropped on Hiroshima, was also present. It was made by Yukiyo Kawano, who used tanmono silk and momen from a kimono.

“Its weightlessness juxtaposes with the power of destruction by the gravity of the subject,” Kawano said. “It has become a ritual-like practice of forgetting nothing, leaving out nothing.” 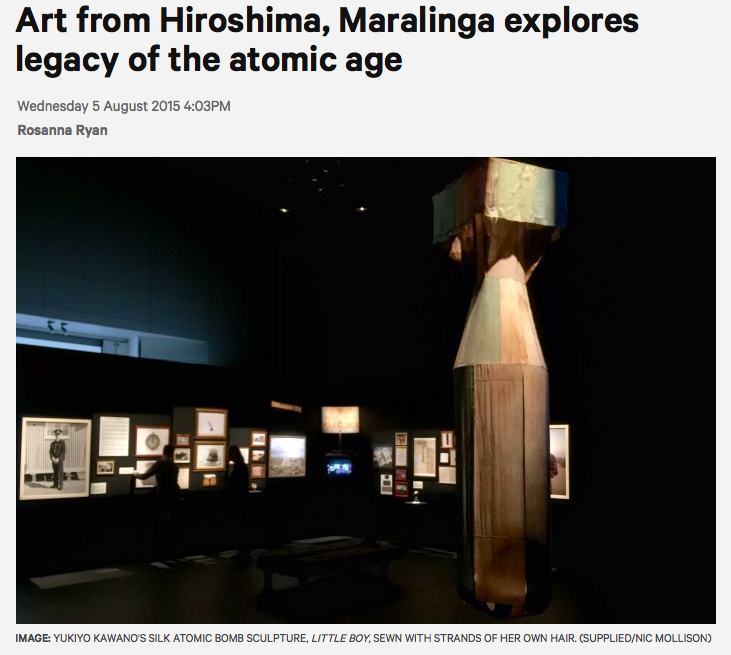